On Bad Writing Advice (Even From Famous Authors) 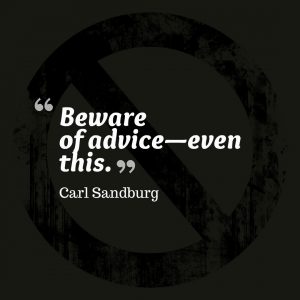 I’ve been writing nearly every day since I was ten. I’ve heard all kinds of crazy advice on writing, from an assortment of fairly unimpressive to very authoritative sources. If you’ve gone to school, write as a hobby, or work in the field now, you probably have a similar story. You’ve possibly already experienced some really bad writing advice and maybe even taken it to heart.

There are some truly horrendous “rules of thumb” out there that I’ve heard over the years in reference to screenwriting, article-writing, or even poetry that range from originally good advice applied too liberally to flat-out lies that began with one reputable person’s odd prejudices. Here’s just a sampling of some of the worst.

You must start your article with a summarizing introductory paragraph.

No, you don’t. In fact, in today’s world, that can be problematically sloppy and dull.

“Here is a lesson in creative writing. First rule: Do not use semicolons. They are transvestite hermaphrodites representing absolutely nothing.” — Kurt Vonnegut

That’s an exaggeration, obviously. When Kurt Vonnegut said that, I’m sure he was sick of the MFA grads in his life trying to show off to him with a well-placed semicolon. Indeed, the rest of the quote is “All they do is show you’ve been to college.”

As a result of his dismissal, many within the creative writing community either fear or loathe this simple punctuation mark.

It all depends on what you want to do with a semicolon. Are you using it to show off? It can shout to your editor, “Hey, look! I know what grammar is. I put this not-often-used piece of punctuation in the proper place.” Naturally, that’s assuming that you did put the semicolon in its proper place, which most people don’t. If you did, congratulations! But in doing that, you also may have put a stumbling block into your prose because so many readers are not used to seeing them.

I’ll agree with Kurt on this one: Using a semicolon just to show off is annoying.

Should you avoid the semicolon at all costs? Of course not. Having to bang out a comma splice or slap in an awkward-sounding conjunction isn’t necessary when there’s a perfectly good punctuation mark that will solve your woes. Really good prose breathes like poetry, and when you need to avoid interrupting the flow, using it won’t land you in creative-writing jail.

“Oh, and get rid of your adverbs!” — Stephen King

Stephen King is not a fan. “I believe the road to Hell is paved with adverbs” is a direct quote. I will agree that placing adverbs gratuitously, consistently, and abundantly into writing can be very annoying for readers, slowing the pace down and turning the joy of reading into drudgery.

If you read the full chapter King’s quote is from, which I recommend you do because On Writing is one of the best books of its class, King explains in more detail that adverbs are paired with boring, lazy verbs. “He went quickly” is not as powerful as “he ran.” “She swam desperately” is not as powerful as “she slapped her arms against the water’s surface faster and faster.” Adverbs are a crutch for a bad writer; they’re something to lean against when the writer can’t conjure solid imagery, not really helping the reader in any way. In his book, King sells us the “action verb” as the solution to many writing woes, which isn’t the only answer but a solid foundation to work with.

Novice editors and writers have taken this out-of-context bit of advice and used it to scribble out every adverb they see. Not only is that unreasonable (I challenge you to write a whole book with no adverbs at all), but it really misses the point entirely. If you change “he went quickly” to “he went,” nothing is helped, and you’ve lost something. Simply scratching out “quickly” doesn’t improve anything and doesn’t do what the famous author is requesting.

The adverb isn’t the problem; writing without considering your reader’s ability to tangibly imagine what you’re describing is. At least in the horror genre, tangible description is the lifeblood of the work, which is why it’s so important to King.

Write how you talk.

“If it sounds like writing, I rewrite it.” — Elmore Leonard

If you met me in person and heard me speak, you’d never know that I’m a writer with a fairly good grasp of the English language. Besides swearing far too much, I abuse words with my regionalisms. I sometimes 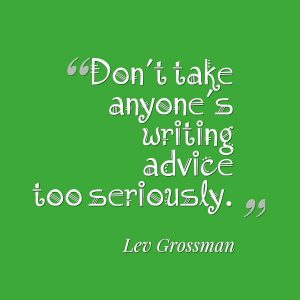 say “on accident” instead of “by accident” accidentally. The poor fool who might attempt to punctuate my conversations would be swimming in a sea of ellipses. If you’ve ever taken dictation, you know how very stupid people sound when they talk.

When writing dialogue, you should absolutely write how people speak. The same largely goes when you’re tight on the first-person perspective. The perspective you choose can deeply affect how your writing should sound when spoken out loud. But for informational articles, client marketing copy, and even fiction from most perspectives, you should have an air of professionalism.

“Never use a long word where a short one will do.” — George Orwell

Unless your family was comprised of lawyers and millionaires, you’ll need to adopt a new tone that’s unfamiliar to you when writing certain client-focused works. It depends on your audience and their vocabulary rather than your own.

“A sentence should not have more than ten or twelve words.” — V.S. Naipaul

We’ve been taught that purple prose is the devil, but relying only on the way people talk limits your vocabulary and sentence structures. People don’t speak in 200-word-long sentences, but they write in them. That’s fine, despite what Naipaul thinks. But I will say that you should absolutely have your works read aloud if you have the time in the later stages of the editing process. It can help find errors and improve the flow.

You HAVE to outline./You should NEVER outline.

“In the planning stage of a book, don’t plan the ending. It has to be earned by all that will go before it.” — Rose Tremain

There are completely contradictory viewpoints on whether or not you should have an ending planned out for your book, let alone if you should outline your work. Some writers are very, very against outlining, and others insist that it’s the only way they can produce quality work and meet deadlines. (I myself loathe outlines, and I know that the instant I put my schemes down on paper, I treat the plans as if they’re a grocery list, a boring task list that I have to force myself to stick to and usually don’t.)

That being said, outlines work for a lot of people, and not having a plan at all can lead to a disastrous, wandering, scrambling plot. I would advise anyone who wants to go with the no-outline route to be horribly ruthless about cutting down your story later on, to the point where one may have lost hours and hours of work for the sake of one clear, nicely written sentence.

“Whoever it was who said ‘Kill your darlings’ was referring to his favorite lines in a story, but it’s just as true for characters.” — George R.R. Martin

Yes, this is really awesome advice for the editing process: Destroy the sentence, paragraph, or even whole chapter that you were really in love with for the sake of the story. Indeed. Do that.

But people have been taking this saying quite literally. Perhaps it’s because of the popularity of Martin’s works and his more literal iteration of that original quote in an interview with Rolling Stone. “Kill your darlings” does not translate to “murder everyone ruthlessly” or “create a dark and broody story because that’s what you’re supposed to do these days.”

Despite popular belief, Martin doesn’t just kill people haphazardly; he knows what he’s doing. He’ll only slice and dice when he needs to make an emotional statement. So many shows and books attempt to copy him but fail because they don’t kill off characters nearly as well.

If cutting off your character’s pinky finger will have the same impact as killing him off entirely, cut off his finger. He’ll need to continue to deal with the loss of his finger, and so will the audience. Just killing him off will force him out of everyone’s mind, which means they won’t care anymore.

Any piece of writing advice that you hear can be really terrible if you take it both too seriously and out of context. Strict rules like “only write what you know,” “never use adverbs,” and “avoid purple prose” usually do nothing but impede the creative process. Having any hard-and-fast rules at all is generally a bad idea when you write (though they’re generally a good idea to keep in mind during the revision process). The creative mind needs to feel comfortable and free in order to produce divergent ideas. Restricting yourself can hamper production.

But it’s much more than that: If you spend too much time attempting to avoid mistakes, you’ll never really grow as a writer. If a young writer cultivates an assortment of writing advice as hard rules, it’s a semi-conscious way of shielding themselves from looking like a fool later on. But looking like a fool (at least occasionally) is completely inevitable, and that practice is really more about hiding the ego than actually learning a new, good writing practice.

That’s why there are so many failed writers out there. That’s why there’s an entire industry based on giving writing advice to people who fancy themselves as writers.

It’s a natural thing to suffer from self-doubt, but writers who are plagued with self-doubt are preyed upon by people looking to sell an advice book or an idea that doesn’t really have any merit.

The best writing advice one can give is to allow yourself to fail, force yourself to recognize when you’ve failed, and see how you can positively adjust accordingly.

Try it, even if Martin, King. Vonnegut, Tremain, Orwell, Naipaul, Leonard, and a slew of other people told you to do otherwise.

3 comments on “On Bad Writing Advice (Even From Famous Authors)”