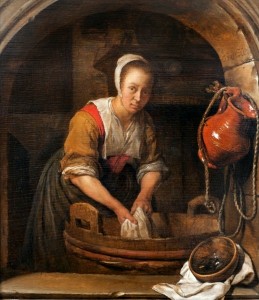 One of the great things about the Internet is that it can spread information far and wide. But one of the problems is that it can also spread things like misinformation, ungrammatical regionalisms, and hideous made-up slang words (I’m looking at you, “bae” and “fleek”). One weird thing that seems to be popping up more and more online lately is something that’s being called the “needs washed” construction: a present-tense verb (often “needs” or “likes” or “wants”) plus a past participle without the usual accompanying “to be,” such as in “the car needs washed” or “the dog wants petted.”

Where Did This Come From?

The short answer to the origin of this construction is that we can blame the Midwest, specifically a region stretching from western Pennsylvania to Iowa that linguists call the North Midland. “Needs washed” is especially prevalent in a dialect known as Pittsburgh English or “Pittsburghese.” Pittsburgh is also the place where they think that “anymore” makes sense in positive uses to mean “nowadays,” such as in, “Everyone’s always arguing anymore.”

But we can’t lay all of the blame on Pittsburgh. (Besides, they also gave us Mr. Rogers, so there’s that.) Hundreds of years ago, this area was settled by a sizable number of Scots-Irish people, and constructions like “needs washed” are common in the dialects of Scotland and Northern Ireland. This weird linguistic quirk apparently stuck around through the centuries since, remaining mostly confined to this one geographical area. In fact, it’s so common in Pittsburghese that if you say the phrase the way the rest of us do (either “needs to be washed” or “needs washing”), some people will think that you sound overly formal or uppity.

The short answer is “no.” While it might be comprehensible to say “the car needs washed” in conversation with someone in Pittsburgh, anywhere else, it just sounds wrong, and in your writing especially, you should always use proper grammar. That means that you have two options: “The car needs to be washed” or “The car needs washing.”

To be or not to be? When it comes to clear, correct writing, the answer is clearly “to be,” unless you want everyone to think that your work “needs fixed.”