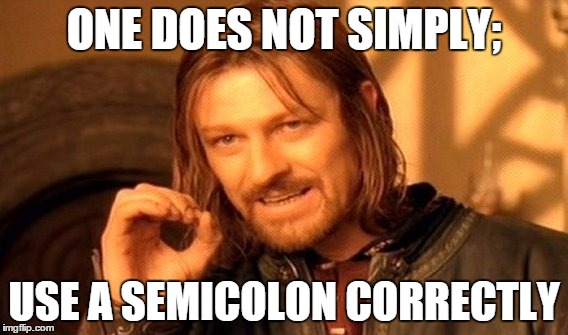 The semicolon has to be one of the most misunderstood punctuation marks out there. Contrary to what that Lonely Island song says, it’s not a colon. And it’s not quite a comma, either, though it can occasionally stand in for one if you’ve already got too many commas at the party, so to speak. But what is the right use for the semicolon, then? If you’ve never quite figured that out, don’t fear: We’re here to help.

Two Sentences in One

Perhaps the most common use of a semicolon is to join two closely related independent clauses. These could have both stood as sentences on their own, but when you tie them together with a semicolon, it adds complexity to your writing and keeps you from having too many short, choppy sentences.

Keep in mind, though, that you should not use a coordinating conjunction between them. If you want to use “and,” “but,” or “or,” use a comma instead.

But you can use a conjunctive adverb to introduce the second clause if you want to more clearly indicate the relationship between them.

Correct: She liked to paint portraits the most; however, her friends said she was better at landscapes.

The most common mistake people make with semicolons is using them where colons belong. Semicolons should not be used to introduce lists or link independent clauses with dependent ones. Here’s a good rule of thumb: If you can replace the semicolon with a period and have two complete sentences, you’ve used the semicolon correctly.

The other major use for semicolons is to add clarity to a list that’s already chock-full of commas. Separate lists of things that include commas in order to make it clear which things are separate items. For instance:

Now that you know how to use semicolons, don’t be afraid to give them a try in your next piece of writing. Just remember to use them sparingly: Like exclamation points, they can be surprisingly easy to overdo. Variety (of sentence structure) is the spice of life, after all!