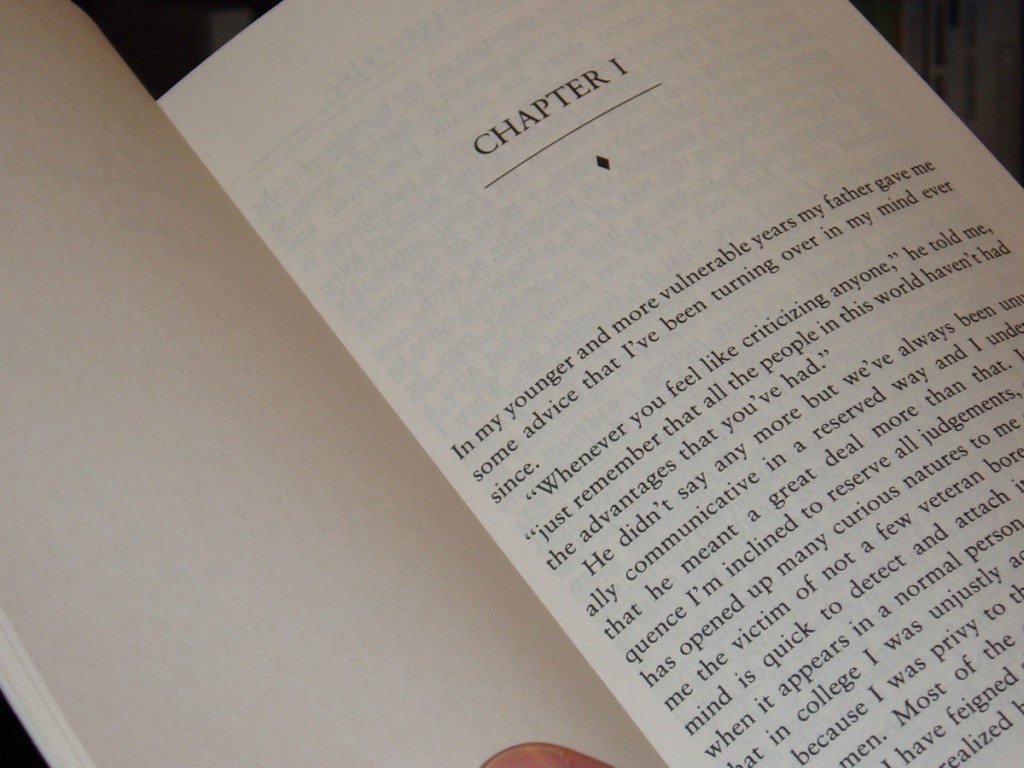 Does your opening line draw the reader in?
Photo by emdot (Flickr)

I can usually tell by reading the first paragraph of a book whether or not I’m going to finish it. I call it my “test.” It gives me a good idea of whether or not I should buy something at the bookstore or borrow it from the library. My attitude is something like, “If you can’t hook me in with 50 words, how are you going to hook me in with 50,000?” So if it doesn’t “have me” (whatever that means) within the first page, it’s time to not buy it, put it back on the shelf, push the spine back in line with other unloved books, and walk away.

This flippant attitude has led to some really terrible karma.

I turn to my own work, tearing my hair out with paranoia, knowing full well that there must be other readers out there in the world who have this very same attitude toward first sentences in novels, trying to find that “hook,” that secret, special sauce that seems to keep people reading, that causes them to, instead of putting the book back, sit down on a plush leather chair (or the floor) and keep going, to turn page after page and continue turning them until the bookstore closes.

The same goes with blog posts — in fact, blog posts are worse. On the Internet, where readers’ attention is always wandering, you have even less time to get someone to slow down and read something. You need to grab faster, hook quicker, and somehow get them to stay.

Novelists seem to have a fishing pole. Bloggers have a carved stick one could barely call a spear.

I tweak. I erase. I rewrite. I edit. I edit again. I lather, rinse, and repeat.

What makes an opening sentence good?

Well, I have no idea.

“It was a bright cold day in April, and the clocks were striking thirteen.”
— George Orwell, “Nineteen Eighty-Four”

This is one of the more striking (pardon the pun) sentences famous literature offers us because of its punch-like impact on the final word: “thirteen.” Clocks are supposed to go to 12, not 13, so something is badly wrong. Why are they striking 13? Orwell already “has” us. It may be considered a good example of a sentence that holds suspense until the end of the sentence, when everything seems to climax and make sense in a new way. But not all of the best opening sentences in literature are these types of sentences, where the biggest impact is left for the final word.

“All happy families are alike; each unhappy family is unhappy in its own way.”
— Leo Tolstoy, “Anna Karenina”

“In my younger and more vulnerable years my father gave me some advice that I’ve been turning over in my mind ever since.

‘Whenever you feel like criticizing any one,’ he told me, ‘just remember that all the people in this world haven’t had the advantages that you’ve had.’”
— F. Scott Fitzgerald, “The Great Gatsby”

Without being so obvious, the authors seem to be saying “and here’s the story about that,” jumping off into the narrative after effectively “announcing” it with a strong, generalized statement. The risk here is that one announces the theme too obviously, summing up the book before the reader even really starts it. This is one of the most well-known examples of this “announcement” tactic:

Charles, you certainly loved to ramble. While the grammatically questionable opening of this novel is very famous and known as one of the best first lines of any novel in history, one can’t help but question if something like this would be good for today’s audience. Would a modern opening like this work in a time of increasingly restricted attention spans? The sentence grapples with intangible concepts in a nearly perfect balanced form, and while it hints at conflict and the theme of the overall novel, one can’t help but wonder (as one often does with Dickens) if you could do more with less.

Here’s an example of something with a harsh dramatic punch with one tenth of the words:

“Mother died today. Or maybe yesterday; I can’t be sure.”
— Albert Camus, “The Stranger”

One could scour the opening pages and track the first lines of other famous books to try to find a consistent theme and come up with nothing. There’s not one grammatical formula, pattern, or even recommended word count a professional might try to offer a new writer. Of course, even if we could come up with a formula for how to write an opening sentence, it would quickly become overdone and clichéd — that’s just the nature of writing.

What makes an opening sentence bad?

Perhaps we can focus on the bad and gain a better understanding of what not to do when crafting our own sentences. For that, we can look to the Bulwer-Lytton Fiction Contest for inspiration. The annual competition invites wretched writing and honors some of the worst fictional first sentences out there. Of course, all of this was prompted by this sentence from the great master of terrible opening sentences himself:

“It was a dark and stormy night; the rain fell in torrents — except at occasional intervals, when it was checked by a violent gust of wind which swept up the streets (for it is in London that our scene lies), rattling along the housetops, and fiercely agitating the scanty flame of the lamps that struggled against the darkness.”
— Edward George Bulwer-Lytton, “Paul Clifford”

This line has become so mocked and hated that mocking it actually has become an annoying cliché in its own right. “It was a dark and stormy night,” is the purple-prose phrase that screams melodrama and tries to make the story sound so much more important than it is. Like a sweaty, desperate man at a bar, the urgent sincerity makes this instantly unappealing.

I’d bet it began oddly. If it began like usual, would it warrant novelization? Again, this first sentence seems to scream, “This is important! Listen to me!”

“In this dream where he was weightless and unalive, where he was a pervading mist of consciousness that seethed and trembled in a vast stretch of dark, there was at first no feeling, only a dim sort of appreciation, eyeless, brainless, and remote, whose singular ability was to differentiate between himself and the darkness.”
— John Edward Williams, “Nothing But the Night”

Did you stop reading this halfway through? It’s OK; we did, too. Even though it’s only half the length of the first line from A Tale of Two Cities, it seems to ramble on for much, much longer with far less tangible ideas.

Both Roth and Williams produced some great material later on, but these starters seem to fail on a major level.

So what’s the secret?

Without making unjust generalizations, it’s certainly difficult to come up with a perfect formula for how to write an opening sentence that will inspire further reading.

It’s clear, though, that a negative factor is predictability. Pleasant or unpleasant surprises in a largely predictable “frame” seem to do well, as do general statements that seem to cultivate interest.

But translating this to your blog post, novel, or writing project might be very difficult; stuffing it into a shoe that doesn’t fit would be an injustice.

And this is just cheating.