Home › Writing Tips › Metaphors Be With You: Creating Apt Comparisons

Metaphors Be With You: Creating Apt Comparisons 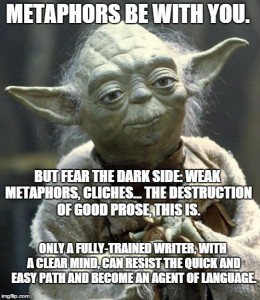 The concept of a thing being similar to another thing is inherently important to the human experience of communication. And yet, a lot of writers have difficulty in dealing with these comparisons. Let us learn about how to create better metaphors and how to avoid using bad ones.

A Thing and Another Thing

To an alien, human beings may seem strange for their use of metaphor: One thing is simply not another thing. The way in which often, physical, tangible objects are compared in speech and writing to convey a similar feeling to each other is honestly bizarre. And yet, most everyone understood Vincent Van Gogh when he said, “Conscience is a man’s compass.”

A conscience — an intangible concept connected with existing as a sentient being — is simply not a compass — a physical object meant to help bipedal apes find the right direction in which to travel. But most everyone can grasp their similarities: The moral “compass” is the conscience, which points out where to go when you’re morally lost. My even stating this might feel obtuse and obvious.

Surely, you don’t need to have this explained to you. But why not? How is your brain connecting those two things together to create a new level of understanding without an intense amount of thought?

In metaphors, two things or concepts feel similar while at the same time being not similar at all.

So How Is That Thing Like That Other Thing?

Without going into too much detail, most metaphors deal with what linguists refer to as the “conceptual domain.” One idea is understood in terms of the other. This is some dense, complicated stuff relating to psychology, schemas, and the way we process new information. Metaphors can help us map our experience; they cut through numerous concepts to bring new understanding.

We all use them because they have much less to do with language and much more to do with how we think. In a tangle of neurons in our brains, we are constantly building and rejecting new connections and creating synapses. The brain is wired to make new connections. A metaphor is an element of language, but it describes something that happens naturally as a part of cognition.

Why Are Some Metaphors Not as Good?

Really, anything goes, then, right? Well, no. When reading, it’s obvious that some metaphors are just better than other ones.

As writers, we sometimes tend to make leaps and bounds from one thing to another thing, and the juxtaposition is rather strange and off-putting. When one makes a weak connection between two things that feature more dissimilarities than similarities, this is a weak metaphor. By and large, one will want to avoid speaking or writing about things that are ridiculously dissimilar, especially in anything other than experimental fiction.

But sometimes, this can be used on purpose to hilarious effect:

“The ships hung in the sky in much the same way that bricks don’t.”

A dead metaphor is one that is so overused as a figure of speech and writing that it has lost its original meaning and hence its imagery. It’s become overused and thus a cliché. Here are some examples:

You can use multiple metaphors at once, but when you keep going with more comparisons until they get jumbled illogically, these are mixed metaphors.

Here’s an example of a mixed metaphor from a speech by Boyle Roche made famous by Bryan A. Garner:

He’s going to nip a floating rat in the bud?

This is problematic for many people. When using several metaphors and jumbling them, you’ve both ended up with something that sounds ridiculous and lost the precious hold you had on readers’ imaginations.

Metaphors can keep going and continue (or extend). Here’s an example of an extended metaphor from a pretty famous guy you may have heard of:

“All the world’s a stage, and all the men and women merely players; They have their exits and their entrances; And one man in his time plays many parts.”

Extended metaphors aren’t at all inherently bad, as most poets and fiction writers tend to use them a great deal. But sometimes they can be “hyper-extended,” so to speak, and reach the point where they stop making sense. Also, in professional contexts outside of poetry and fictional prose, extended metaphors can seem very awkward.

Note that metaphors are different from allusions: Allusions are often references to other works. They call something to mind without explicit saying it.

Also, metaphors are not similes: Similes are similar, but they offer direct comparisons and often use the words “like” or “as.”

This is something very subjective; a “strong” metaphor is a matter of opinion. How you create a better metaphor is to think about the type of link you’re creating.

The two things might relate based on their imagery (the thing looks like or visually relates to the other thing) or their societal meaning (called a “root metaphor,” this metaphor relates two things based on a shared underlying worldview), for example. But they may relate in an almost indescribable way on an emotional or spiritual level, too.

Metaphors can be a lot of things: visual, conceptual, sensual, cultural, and logical.

Is there one right way to do a metaphor? Not really. I shudder to make sweeping generalizations, but in my personal experience, emotional, tangible, sense-focused comparisons (“His voice was fluttery like clothes on a line”) tend to be understood faster than rational or high-concept comparisons (“He made me nervous like I was interviewing for a job”).

Is faster better? That’s a matter of opinion.

One of the worst parts of writing metaphors isn’t coming up with them but knowing when to use them. In creative pieces, you’re free to have a field day, but in most other types of writing, such as blogs, emails, white papers, news articles, and educational pieces, they tend to feel out of place. Even in creative works, a “field day” may be too much.

Before you use a metaphor to describe something, ask yourself the following questions:

If the answer to all of these questions is “yes” in your opinion, go for it.

Or just go for it anyway. You have the power to make these decisions. Even if it doesn’t make sense to one person, it may make sense to another. That’s just the power of subjectivity in art, which is where the metaphor truly originates. Experiment, play around with different combinations, and enjoy it. 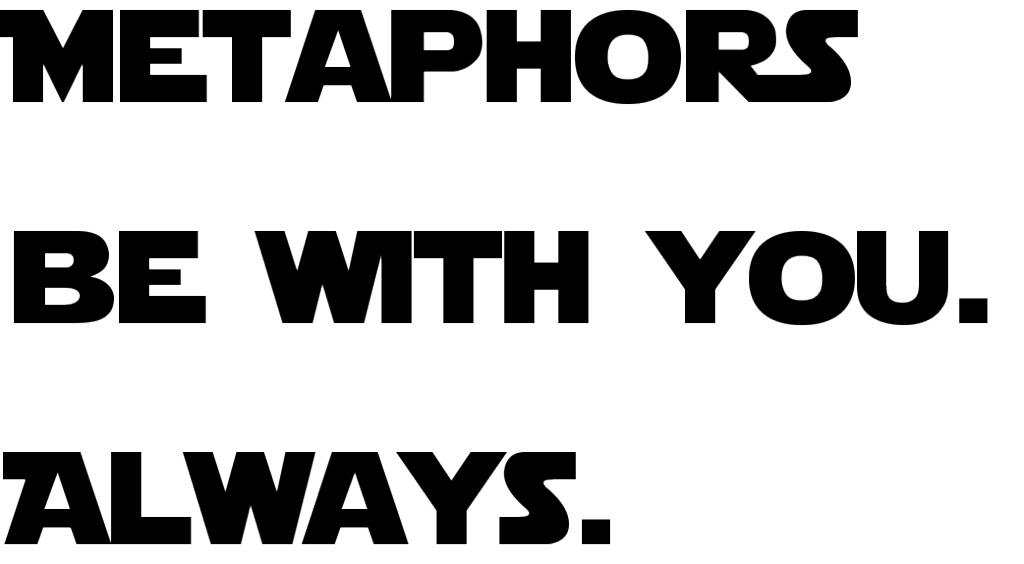