“Should old acquaintance be forgot” … something, something, mine? It’s easy enough to mumble your way through this traditional New Year’s song, especially considering that you might’ve had a bit too much champagne by that point anyway. But learning a little about the song that’s been referred to as “old lang syne,” “old anzine,” or “the old lang song” can help you gain a new appreciation for why “Auld Lang Syne” is such an appropriate tune to usher in a new year. (And if you’re at all Scottish, you might gain a little extra pride in your heritage, too.)

The story starts with the man who wrote “Auld Lang Syne,” Robert Burns, who is widely considered to be the national poet of Scotland. But actually, “wrote” is a bit of a misstatement: While he was the first to write down these lyrics, he didn’t create them on his own. Burns certainly did write plenty of original works, but he was also a preservationist of sorts, writing down and codifying old folk songs he heard so that they wouldn’t be lost to time. So it went with “Auld Lang Syne,” the lyrics of which he said that he heard from an old man. 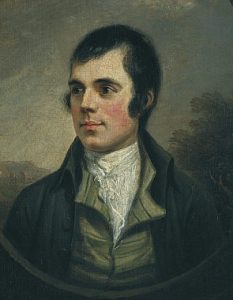 Burns wasn’t just saving some old song lyrics, though: He was helping to preserve a national tongue. Most of his works were written in the Scots language, which evolved from Old English in Scotland while Middle English went off in a different linguistic direction. Scots is one of the three official languages of Scotland today, along with English and Scottish Gaelic, though it’s still debated by some whether Scots counts as a language in its own right and not just a dialect. On one hand, Scots is actually somewhat intelligible by English-speakers; on the other hand, Scots actually has its own regional dialects across Scotland. Perhaps linguist Max Weinreich was right when he famously said that “a language is a dialect with an army and a navy”: Since Scotland hasn’t had either in 300 years, that would explain why Scots gets such short shrift outside of its mother country.

In any case, the fact that it’s written in Scots explains why “Auld Lang Syne” confounds so many English-speakers every New Year’s Eve. Here, then, is a modern English translation of the lyrics to “Auld Lang Syne” (meaning literally “old long since,” which most people take to mean “for old times’ sake”), along with the words in the original Scots. Study either version and you’ll be one of the few people not mumbling after the clock strikes midnight to usher in the new year.

2 comments on “Deciphering the Lyrics to “Auld Lang Syne””