The Red Pen – Watching Your Figures (of Speech)

The Red Pen is a series of tutorial/informational articles written by our editorial team here at Online Writing Jobs. If you notice grammatical mistakes in their writing, please circle the mistakes in red pen on your monitor and send us a screenshot. We will address it immediately. 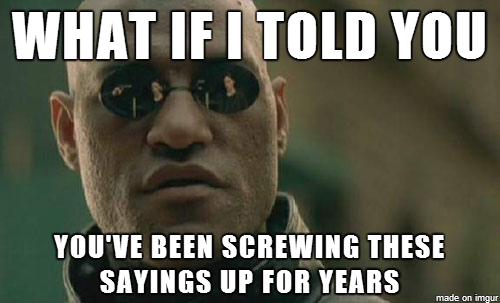 English is an interesting and colorful language, and sometimes, we find ourselves using turns of phrase in our writing that we’ve spoken a million times but have never needed to write down. Often, idioms can include seldom-used or downright archaic words, and that can lead to spelling pitfalls. Here are some of my favorite commonly misspelled idioms:

English is an old language, and along the way, it has picked up quite a few expressions that would’ve been more easily spelled when they were created. But before you get frustrated, remember that some of today’s idioms and slang will likely stick around and become just as confusing to future generations as the language evolves.